If all goes to plan, ProVUE will be getting a big infrastructure upgrade this weekend. This upgrade will provide a solid foundation for the next decade or more of behind the scenes Panorama operation. To accomplish this, some aspects of the server will need to be offline temporarily during the weekend. This won’t affect the web site, and it won’t affect your ability to work with Panorama databases, but for a short while you won’t be able to perform tasks like making payments, creating new accounts, start a new trial or log on to a new computer. Basically any task that requires the Site License window will be temporarily unavailable. (The Panorama Database Exchange will also be affected.) We’re performing this task on the weekend to minimize disruption (weekend usage is about half of weekday usage).

You may be wondering what sort of upgrade is being installed. All of the back end server logic for Panorama accounts and the Site License window is implemented using Panorama Server (of course). But when this logic was first implemented back in 2016, Panorama X Server wasn’t available, so Panorama 6 Server was used. This has worked well, but the code is difficult to work with (particularly since the main procedure is very close to the 32k limit), and of course Panorama 6 Server will only work on obsolete hardware. So switching the back end logic to Panorama X Server has always been part of the plan.

The required changes to the code were very minor, only a handful out of thousands of lines of code. The real challenge has been to try to ensure that the transition happens with minimal downtime and with no disruption for Panorama users. To that end, most of the last two months have been spent doing systematic testing, including complete dry runs of the full transfer process. In fact both Panorama 6 and X have been running in parallel on the server for several weeks (though only Panorama 6 has been used by live customers). So hopefully there will be no surprises when the Panorama X logic goes live. Wish me luck!

Good luck, indeed! But based on my experience with Panorama Server running web sites, it should go well, being stable and reliable.

So, this weekend’s transition did not go as smoothly as I hoped. If you’re interested in the gory technical details, read on. Otherwise, just skip the rest of this post – but be sure to download and install Panorama X 10.2 b30 immediately. In fact, please stop reading this and install b30 now.

Ok, the install is done? As Jim Cook predicted, there was no problem with Panorama X itself. In fact, all the data was swapped from eleven Panorama 6 databases on the server to corresponding Panorama X databases on the server in six minutes. There are a couple of new statements in the b30 release that allowed that process to be fully automated (startnewdatabasegeneration and uploadnewdatabasegeneration).

I thought at that point I was nearly done, the hard part complete. I was so, so wrong. The problem was in getting existing copies of Panorama to connect using the modified URL – panoramax.cgi instead of panorama.cgi. My plan was to use the ReWriteRule feature of the Apache server software. I’d used this before and it seemed perfect for this task. I thought it would only take a few minutes to set it up, and I did a test on Saturday and thought it was working. Famous last words (and it turns out the test wasn’t done correctly and it seemed to work because the Panorama 6 server was still running at the time). Long story short, my rewriterule didn’t work for POST web requests, only GET requests, and after several hours I was unable to figure out how to make it work. (If you think you know how to do this, first make sure that your solution doesn’t require a redirect thru the browser, that won’t work. Secondly, it’s too late, I already went to plan B, as described below. But thirdly, I be interested in knowing the solution if you really know it, maybe it would come in handy someday.)

Fortunately I had a plan B in my pocket. Back in 2016 I anticipated that the URL for connecting to the provue server might change someday, so Panorama includes a mechanism that allows the server to redirect to a different URL. Once your local copy of Panorama sees a redirection, it remembers that for the future. So, I modified the Panorama 6 server code to respond to connections with the redirect command. And it worked! (Not surprising, since I tested this back in 2016.) Unmodified copies of Panorama correctly redirected to the new server, and everything was working smoothly. In fact, I started to see customer activity on the new Panorama X server, working exactly as intended.

However, it turns out that the testing of the redirect feature done back in 2016 was incomplete. After all, the server had never actually permanently moved before. The redirect works, but only as long as Panorama is running. When you quit and relaunch there’s a bug… and it stops working completely. It doesn’t connect with the old or the new server, it just doesn’t connect at all any more. For example, if you open the Site License window and try to log on, you’ll see an alert about the arraychange( function requiring a text value. Now you’re stuck. The Site License window won’t work, and Panorama can’t report usage to the provue.com server. After a while (probably a couple of days), you’ll get an alert that you can’t continue without connecting to provue.com. But you can’t connect.

The fix is only a few characters, but it requires updating to the latest b30 version of Panorama. Fortunately that was ready to go other than this fix. I really wanted to avoid this scenario, but the end result is that ALL Panorama users need to update to b30 immediately. This includes anyone still running 10.1 or 10.0.

Note: If you do so right away, you should have no problem in automatically updating to the new b30 version. But if you’ve already quit and relaunched Panorama since the server changeover, the Install and Relaunch option may not work. In that case, you’ll need to manually install the b30 version. You can use the Check for Updates window to download it, but then you’ll need to quit and manually move the updated version from the Downloads folder to the Application folder (or wherever you keep Panorama.app). You can also download b30 from the main provue.com web site, just click Download Trial.

Super Obscure Note: Earlier versions of Panorama will still run, they just won’t connect to provue.com. My suggestion would be to delete all old versions. But if you really wanted to, you will still be able to run an old version for a while, as long as you don’t need to use the Site License window, or launch the server. Any usage that happens when running the older version won’t be sent to provue.com, but it is saved locally, and will be sent the next time you run b30 (or later).

It worked properly for me. It may be that this part of Jim’s post above applies to you.

Note: If you do so right away, you should have no problem in automatically updating to the new b30 version. But if you’ve already quit and relaunched Panorama since the server changeover, the Install and Relaunch option may not work. In that case, you’ll need to manually install the b30 version. You can use the Check for Updates window to download it, but then you’ll need to quit and manually move the updated version from the Downloads folder to the Application folder (or wherever you keep Panorama.app). You can also download b30 from the main provue.com web site, just click Download Trial .

I’ve posted more detailed instructions about what to do if the automatic Install won’t work. Critical Panorama 10.2 b30 Update -- INSTALL NOW - #4 by admin.

I got the same error note, and have no idea what it means. I did not get the window with code etc. Just this: 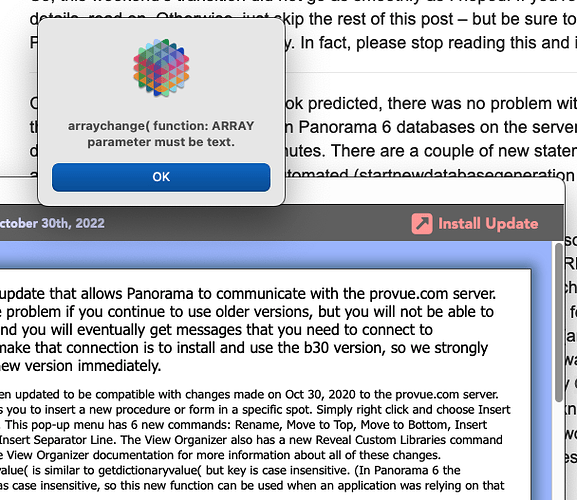 I got the same error note, and have no idea what it means.

The error is in Jim’s procedure. It’s nothing that you did. Craig got a more elaborate error dialog than you did, because he selected that in his preferences. 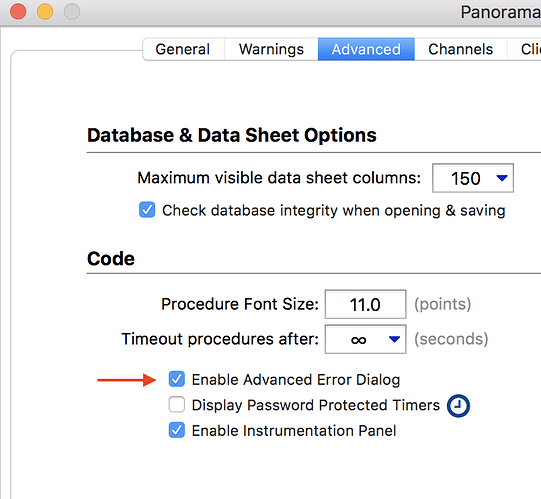 If this happens, you’ll have to manually complete the install. If you look in the Downloads folder, you’ll see that there is a file PanoramaX_4183.app there. [image] To manually install this file, first quit the Panorama you have running. Next, rename the file PanoramaX_4183.app to simply → PanoramaX.app. Now drag this new PanoramaX.app into your Applications folder, replacing the existing copy of Panorama. Launch the new copy of Panorama and you’re ready to go. Another option is to dow…