Update: The b23 release has been removed from auto-update because of the Find/Select problems mentioned below in this thread. If you are not using the Find/Select dialog you can continue using b23, otherwise you should use the Check for Updates command to re-install the b22 version. (However, early investigation indicates that there might be problems with other dialogs, though that has not been confirmed yet.)

A new version is now available. If you’ve already installed b18 or later, you can simply choose Panorama>Check for Updates to install this update. If Panorama isn’t currently running, it will automatically offer to download b23 when you launch PanoramaX.

If you haven’t installed b18 yet, you’ll have to use the Download Assistant as described in this previous post.

This release note actually covers both b18 and b17 (b17 was not previously released or documented publicly). There’s a new way to download this release – no more downloading with a web browser. Instead, you’ll use the Download Assistant which is available in the Panorama X Database Exchange. Follow these steps to install this new version. Open your current copy of Panorama Open the Database Exchange (from the Help menu) and search for “Download”. [Napkin 8 07-22-21, 2.54.47 PM] Download t…

This release includes about a half dozen bug fixes, there are no new features:

Command-shift-escape does not seem to be interrupting loops.

Two people have received this message after/during download of b23. One repeated the download and no message came up the second time. The other, proceeded to install b23, and seems to be using it. Should she be worried?

I have been getting errors from the find dialog box 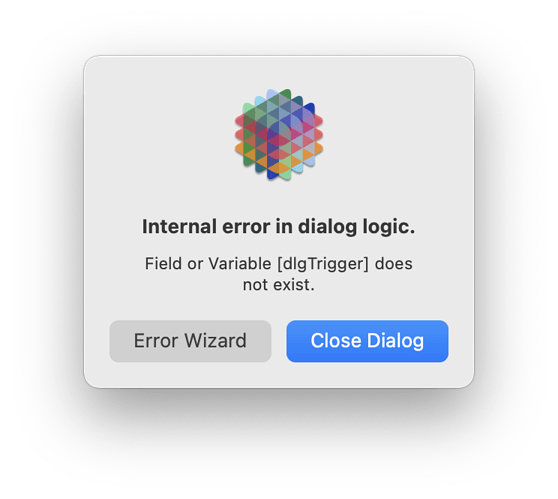 reverting back to b22 fixed the problem. I will try upgrading again later today from a different machine.

Also getting the internal error message…

Command-shift-escape does not seem to be interrupting loops.

This works correctly in my tests.

The other, proceeded to install b23, and seems to be using it. Should she be worried?

I would recommend that she re-download the update. However, it will not let her do that because I have removed the b23 update from the automatic feed because of problems with the Find/Select dialog. She should either go back to b22 or use this manual link to re-download b23.

I have been getting errors from the find dialog box

I was able to duplicate this problem, and I’m investigating. Nothing changed in the Find/Select code, so apparently one of the other low level changes made in b23 had an unanticipated effect.