Three or four times over the past week or so, I’ve had Text Editors in a database get completely out of synch with the actual data.

So far it hasn’t amounted to any data loss or corruption. Clicking from record to record, closing and reopening windows has caused it to self-correct; so far.

The first screen shot shows the Text Editors in the background displaying what is expected from the record in the Datasheet. 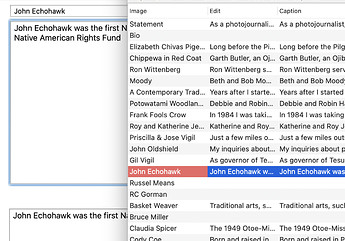 At times it changes to what the other two screen shots display. Moving to other records gets a similar response for a while. The Text Editors are displaying extracts of the entries of other records. The extracts aren’t consistent either. It tends to be a random handful of consecutive characters from any part of another entry and from any field. The extracts aren’t even necessarily from the same wrong record. They’re from anywhere in the database.

At some point, something has caused it to get back in synch, but I have yet to know what I did that accomplished it. 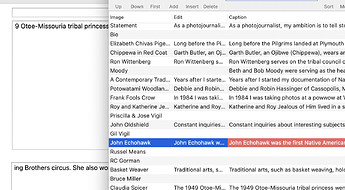 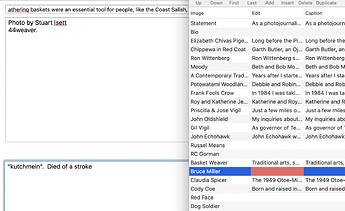 On the first occasion that this happened, the display in the Text Editors was corrupted to the point that I was seeing symbols rather than words, much like what you see if you are viewing binary data as text.

The 100K database was created by whatever version I was using 30 days ago and is pretty simple. It has 7 fields, 1 form and no procedures. The form has 4 Text Editors, 1 image display, 2 single word Text Displays with very short procedures, 2 Text Displays that display word counts and 6 checkboxes attached to a single field.

I have previously reported a TextEditor issue that persists and, who knows, it could be related to the problem reported here. For DBs with Autounlock the server the data in a text editor connected to a field will not be saved when the auto unlock times out. That is, suppose you start editing a TextEditor (that is connected to a field), and stop editing until the unlock period expires, the changes you have made in the field/TextEditor will disappear and not be saved.
While I would like to use auto unlock, I have decided not to do so, since users may be inconvenienced and/or lose data because of this bug. The TextEditor should work just like editing a cell in the DataSheet works: when the autounlock period expires, the changes are saved and the editing status turns off.

I was able to duplicate and fix this bug a few months ago, however Thomas reports that it still is not fixed for him.