Server Crash with Out of application memory message

Overnight our PanX server quit. I have a modified version of Jim Cook’s server monitor database running on the server computer, which is intended to restart the server in case it quits. It did not work in this case.

The dialog box shows PanoramaX was using over 61 GB of memory! The only PanX application running was the server monitor, so something was fubar.

I installed the MacOS update over the weekend, so it is a suspect for the cause. The server has been running since March, when the last crash occurred, except a few occasions when I stopped it temporarily.

Restarting PanX and PanX Server worked normally and they have run for the last couple of hours. I have no idea what causes this kind of situation. If anyone knows about this sort of thing, please reply with anything that might be useful. 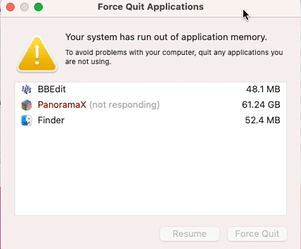 Big Sur would be a prime suspect in my book. My wife’s laptop gets notices frequently that the system has run out of memory. It’s typically when running some simple app, such as EasyFind. I’ve encountered it too on occasion when doing something that really shouldn’t be an issue.

I’m not running the server at all, but I’m responding because I started getting this “out of application memory” message the other day. It was other applications that were showing huge amounts of memory in use, though the Activity Monitor didn’t show a dangerous amount of memory pressure at any time. I restarted the computer and haven’t seen this phenomenon since. I did have a little correspondence about it on TidBits Talk and someone there looked at my screen shots and said that things looked good to him. Bottom line, it seems to be a problem with the system update and not related to Panorama at all. In fact when it happened to me, Panorama was open and didn’t show an unusual amount of memory. Once the offender seemed to be Outlook, another time DockView. Haven’t seen it in several days, fingers crossed.