Printtopdf in a database which has been working reliably for years produced what Preview on several different Macs alleged were unopenable pdfs for a couple of weeks, and fortunately are now opening as expected again. (The pdfs which Preview did not open still do not.) 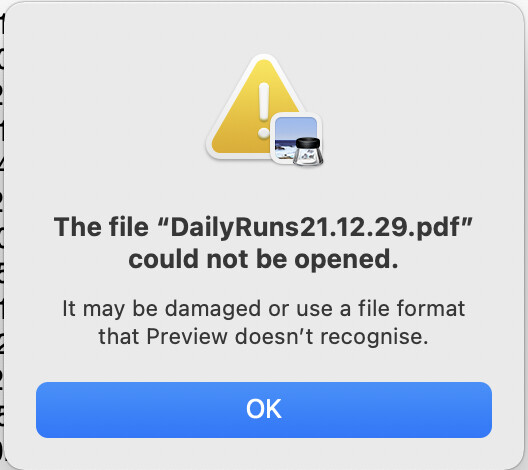 All of our many other Printtopdf pdfs from different Panorama files were opened by Preview through this period. I have never seen this problem before, and nobody in the forum appears to have reported this issue. I do not think this curiosity was caused by Panorama, but wonder if any forum readers have advice.

Sometimes I am watching macOS 12.1 seeming to lose knowledge what apps are allowed to do and which documents they should be able to open. — A simple restart of the Mac helps.

I know what you mean. However these were created on a Mac running Mojave and persisted through several restarts. The pdf files don’t open on Monterey either. (Maybe it was one of those pesky muons, in which case it could have been worse.)

Do all these files contain more periods than just the one in the file suffix? What if you replace those periods in the date with dashes? 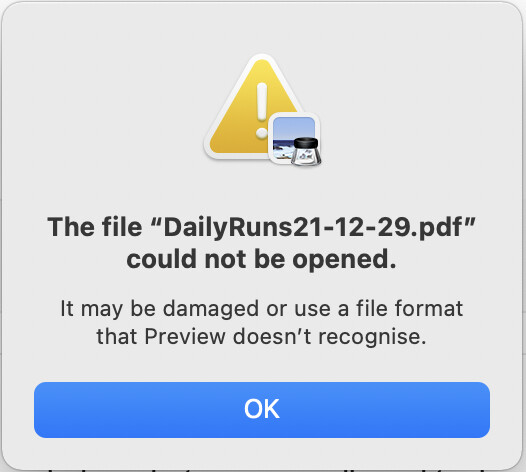 The periods have worked for ages, in fact we usually use this date style in pdf report names.

Are all objects of your form inside the printable paper format?

The form contains about 80 objects. All objects appearing in the report are inside three report tile objects. There are three text display objects outside and between the tile objects which contain notes about the form design, as well as six text display objects being kept to reinstate to the tiles in the future; none of these appears on the reports and all have been outside the report tiles for well over a year. Is that what you mean by “inside the printable paper format”?

I was just guessing. I meant to remember to have read about an issue with Image Display objects laying almost inside the printable area, but let’s say 1 pixel outside.

Good that it is working again!