A new public beta version is now available. If you’ve already installed b18 or later, you can simply choose Panorama>Check for Updates to install this update. If Panorama isn’t currently running, it will automatically offer to download b26 when you launch PanoramaX. If you haven’t installed b18 yet, you can simply go to www.provue.com and download it.

This update is a big step, because it’s the first version of Panorama X that includes both Intel and native Apple Silicon (M1) code. All code in Panorama X is now M1 native, including the server. In our tests this new version is between 3 and 6 times faster than the previous version on M1 computers (depending on the operation). 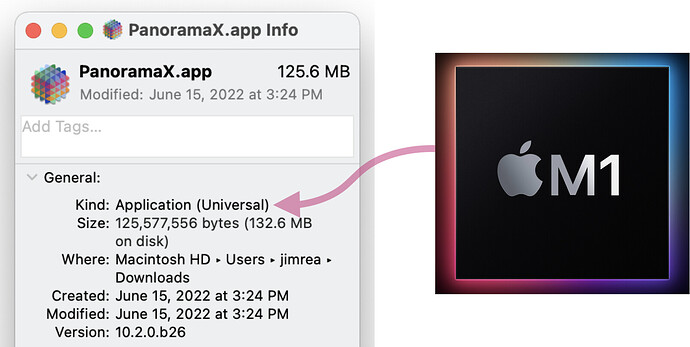 Here’s the complete list of changes in this new version:

Wow. Always hard to believe that there were that many things to resolve.

Hah! That list is infinite. When you’re wondering why your favorite bug hasn’t been fixed, keep in mind that it is competing for priority with an infinite number of other items

Also, keep in mind that:

The Panorama 6 Installer Wizard now displays a warning if running on macOS 10.15 or later. (The warning tells you that Panorama 6 is not compatible with the version of macOS on the computer.)

I get this warning on my Mac running 10.13 High Sierra. Panorama 6 runs just fine on my machine.

I have Pan6 and PanX on my High Sierra Mac Mini and PanX on a Monterey Mac Mini. Both versions work on their respective machines.

I believe I keep an “unpacked” Pan6 on some backup device. But the need to launch Pan6 has almost completely disappeared.

My post was simply a bug report. I went through the download process prior to answering a question in another topic. I didn’t need the download. Panorama 6 is already installed and runs on my machine. 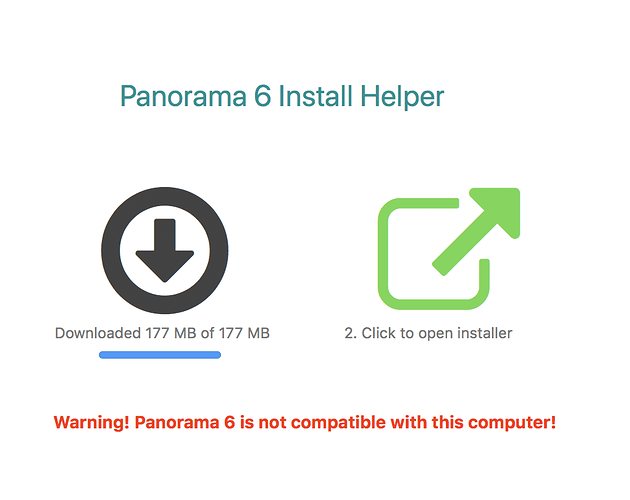 Apple started warning you 32 bit apps were going away 2OSX versions before the actually died (absent Parallels) with 10.15.

The Panorama 6 Installer Wizard now displays a warning if running on macOS 10.15 or later. (The warning tells you that Panorama 6 is not compatible with the version of macOS on the computer.)

The warning is saying it is not compatible with this machine, when it is in fact compatible.

The warning is saying it is not compatible with this machine, when it is in fact compatible.

Dave is correct – this is a bug, which I have just corrected. I added this warning because recently someone used this window to download Panorama 6 onto a computer with Big Sur and was surprised when it didn’t work. Though I am now wondering, perhaps what I should really do is completely remove the Panorama 6 installer window, and also possibly remove Panorama 6 from the web site. I’m not going to do that today, but that may happen soon.

This morning when I restarted my server, Pan Server presented me with the notice of the available update.

I’m sure the situation was due to my failure to stop and start Pan Server to properly install the update earlier. It does seem that the window shouldn’t be coming up on the server though.

I have to wonder if some of my recent reports of problems with the server are negated by this oversight on my part.

It does seem that the window shouldn’t be coming up on the server though.

I thought surely I had coded it so that this window wouldn’t appear when launching the server, but you’re correct, I hadn’t (I have now). Thank you for this report.