A new public beta version is now available. If you’ve already installed b18 or later, you can simply choose Panorama>Check for Updates to install this update. If Panorama isn’t currently running, it will automatically offer to download b25 when you launch PanoramaX. If you haven’t installed b18 yet, you’ll have to use the Download Assistant as described in a previous post, or you can simply download it using this link:

This version includes minor bug fixes. The biggest change is invisible - this version was entirely created on an M1 Macintosh (though it does not yet contain M1 native code) and this version is notarized so that it can be installed on recent versions of macOS without having to use a special installation procedure. 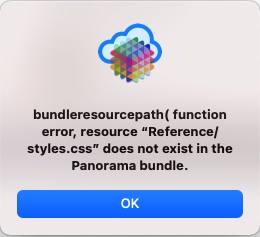 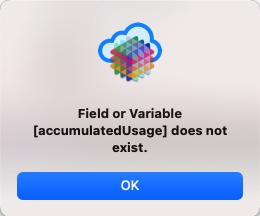 All went well on my PowerBook for the update, but when running the update on my mini that runs the server, I had 2 sucessive errors with the 2nd one not allowing the update to install.

A 2nd try resulted in the same errors. But after a restart, Panorama appeared to be fine with b25 as the running version.

After the restart, I did get this error though.

Not sure if this is b25 related but…

I’ve opened a few files without a problem. But now I tried one file and it apparently opened but without any windows. It was not in the Window menu but I did find the file via the View Organizer. I used the Forms button to find the primary window, opened it up and it was good to go. (I am not a user of Secret windows and this happened on the 1st occurance after updating to b25.)
The next file I tried to open, the same thing happened. But after going to View Organizer, using the Procedures tab, I can see procedures. Using the Forms tab, nothing appears. Ow. Ok. How do I open a db with Procedures but no Forms?

Ok. 20 minutes later… In a working db, I created this simple procedure

I then ran it and voila, my missing db’s datasheet appeared. LOL. Ya, that file did not have any forms, just the datasheet. O well. A long way to get a simple file open that has not had problems opening before.

May not be b25 related, but a procedure that has run fine before throws ugly text in several fields of the current record, then crashes Panorama. Multiple times repeatedly. I commented out this line of code and it all then worked as expected. That line has worked before fine. Perhaps it may have been the cause of previous crashes as well. Just not sure.

And yes, there is a field named ‘Email_Log’

opened but without any windows

I don’t know why your database opened without windows, but Panorama’s Memory Usage window does have a feature that allows you to open the data sheet for a database with no windows. Simply right click on the database name and choose Open Data Sheet from the popup menu.

I had not thought of using the View Organizer for this purpose, but it can be used for this. If the database has no forms or procedures, you can choose Open Data Sheet from the Database menu.

I believe that it is just a coincidence that this error occurred while you were doing the update (and it is completely unrelated to the bundleresourcepath( error). And again, this occurred while you were still running the old version, so it is not a new bug. But it is definitely a bug, and one that I am glad to have found out about. It was a simple fix.

After the restart, I did get this error though.

You got an error with no message?

Am I correct in assuming that this blank alert only happened once, and didn’t happen again the next time you relaunched Panorama?

I think you are ok, but If you have any more weird problems you might want to trash your copy of PanoramaX.app and download fresh using the URL in the post above.

Ok. Using the Auxiliary Files feature is causing the other files to be opened in Secret mode. In the Clubs db, the People, Facilities, and Dance Levels dbs are all declared as Auxiliary Files and get opened but in Secret Mode.

If I open the People, Facilities, and Dance Levels dbs each first, they open normal. I can then open Clubs and all is as expected with all showing in the Windows menu. If I open the Clubs file first, then the Auxiliary files get opened in Secret mode and I have to use the Memory Usage window to see their forms, etc.

Using the Auxiliary Files feature is causing the other files to be opened in Secret mode. In the Clubs db, the People, Facilities, and Dance Levels dbs are all declared as Auxiliary Files and get opened but in Secret Mode.

Only when you have set the auxiliary files to open without windows. 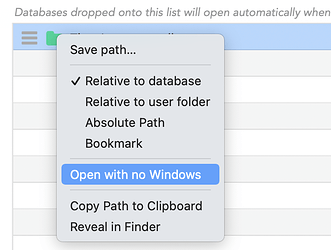 You are correct in that that fixed it.

But let me assure all that I did not set that feature. I did not recall that it was even an option. Prior to the b25 update, I’ve been using these files daily without a problem.

assure all that I did not set that feature

There should have been nothing about b25 that changed the way that Auxiliary databases work, but I’ll be on the alert for further reports of this.

A post was split to a new topic: Editing Data in a Form vs. Data Sheet