I haven’t seen this come up yet here, so I thought I’d better report it.

New procedures added after upgrading to 10.2.0.b26 (4060) have resulted in the procedures not being shown in the top menu (Admin menu, in my database’s case). When you pull down on the menu and hover over the blank space where the menu item should be, it shows in black text.

I don’t think I have anything selected in the menu section that would effect this. This applies to newly added procedures as well as old ones that I renamed in an attempt to track down the problem. 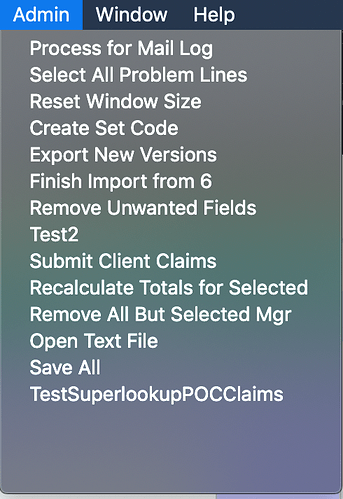 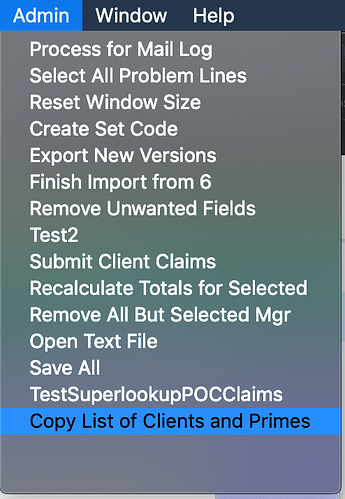 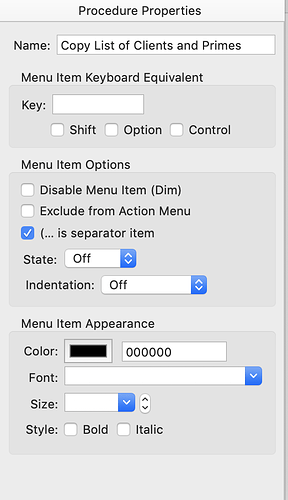 Change the color to white. It looks like it is defaulting to black. 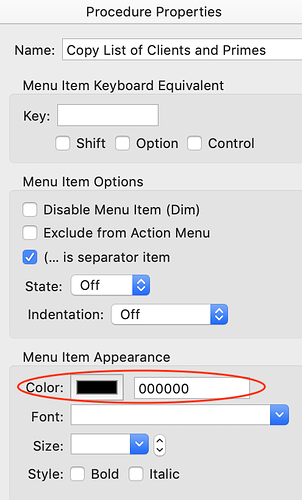 Thanks. Didn’t check that. Don’t know why it’s defaulting to black. Maybe a confusion with selecting a dark theme.

The problem is apparently caused because you are using Dark Mode, and it’s especially bad on 10.14 (on later macOS versions the menu background is not so close to black). Panorama X does not support Dark Mode.

I don’t really understand why this changed in b26 (assuming it did change, I didn’t go back and test earlier versions). Even though Dark Mode is not supported, I have tracked down the cause of this specific behavior, and it will be fixed in b27.

As Dave suggested, changing the menu color to White fixes the problem right now, but in a very specific way. If you do that, it won’t work if you ever switch back to Light mode. I would suggest turning off Dark Mode until b27 is available.

Starting with b27, Panorama will interpret an Action menu color of black (000000) as “absense of color”. In that case, Panorama will allow the system to set the menu text color automatically. Usually it will be black, but in Dark mode the color will be white. If you really want black all the time you will have to use a color of 000001, which is almost black and basically looks the same.