Thoughts? I updated to macOS Monterey, wiped the disk to create a nice clean development computer. When attempting to activate the server I received this error. 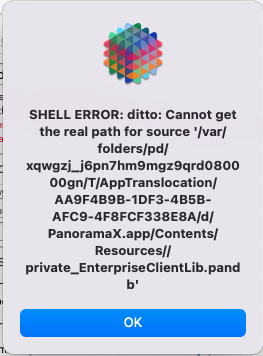 That looks like the sort of path you get when you use a browser to download an application from somewhere, and use the application in the same folder where you unzipped it.

Try moving Panorama to another folder. You can then move it back after you have done that.

Dave, you are a genius. I dont think I would of ever thought that putting the zip in the same folder would be a problem. You nailed it. All things Panorama are working.

I dont think I would of ever thought that putting the zip in the same folder would be a problem.

That’s actually not the problem. The problem is that the folder was never moved after unzipping it, so Apples “app translocation” security system is kicking in. As Dave mentioned, you could move the app to another folder, and then back into the same folder the Zip file was in and it would then work. As long as it’s been moved at least once, you’re good.