Over the past couple of days we have experienced an occasional freeze while in the Database Options Window. There is no beach ball, but all activity stops. Clicking on Cancel or OK does nothing. We have had it time out, and when it does time out, we get the following error. 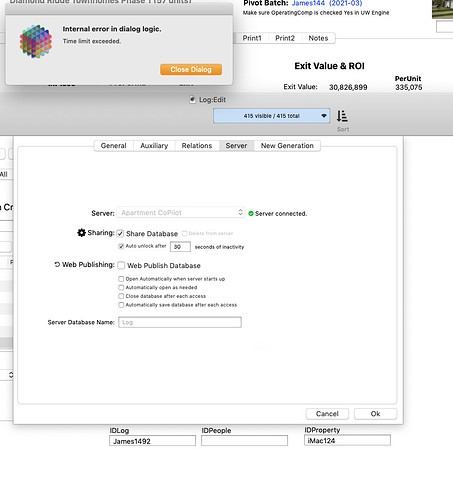 We are having a hard time replicating the problem. We might be pushing buttons too fast. We are still watching to see if we can pin down how this happens.

Does this “freeze” happen when you first open the dialog, or after you perform a particular action?

It usually happens when we first open the dialog.

I would suggest that you make sure Instrumentation is set up and enabled on your computer, then enable instrumentation for DATABASEOPTIONSDIALOG. (You won’t be able to log to Xcode as I am doing in this screen shot, but you can easily log to a text file with minimal setup.) 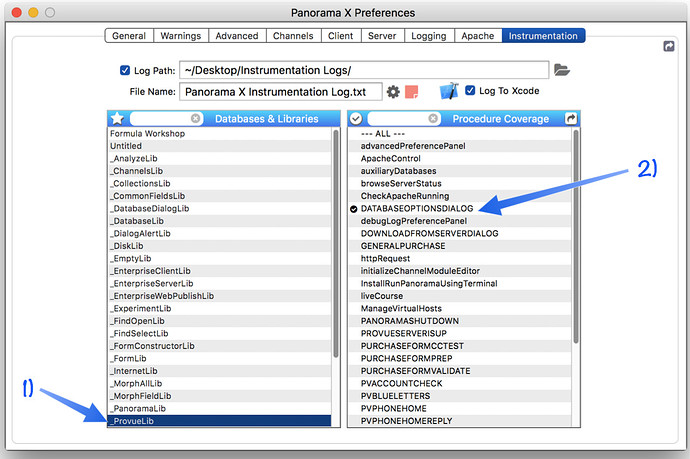 Hopefully if this happens again, the instrumentation log will show how far the code got before it hung up.

If you haven’t used the instrumentation log before, see the Debug Instrumentation help page. There are also two course videos from earlier this year that cover this.

I believe I have seen the same issue in a couple of different situations. Just now it happened as follows:
I opened Formula Workshop and pasted in an equation, which I expected to generate either a true or false result. But PanX stopped responding and most of the menus are grayed out.

The equation I pasted in is:

Here is what the menus look like: (These are the signs, if I understand correctly, that PanX thinks a procedure is running and has disabled mouse clicks and greyed out the menus to prevent stray mouse clicks or keystrokes from causing the procedure to fail.) 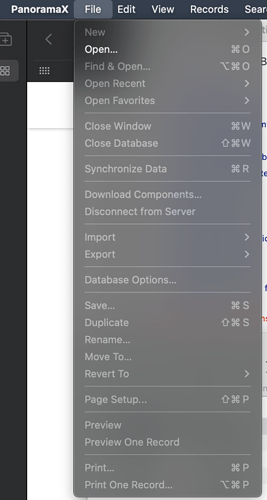 Eventually, I force quit to escape from this freezing.

These are the signs, if I understand correctly, that PanX thinks a procedure is running and has disabled mouse clicks and greyed out the menus to prevent stray mouse clicks or keystrokes from causing the procedure to fail.

They don’t mean that Panorama X thinks there is a procedure running, it means that there IS a procedure running. This could happen in your example if the database is very large. Or there could be a bug. Did the Formula Workshop display the result?

The b22 release will have a new capability so that you can see in the instrumentation log what procedure is running.

In looking at this further, the formula above, which I pasted into the Formula Workshop, includes a local variable, lvinvoice. I was planning to substitute a fixed value, but could not. Possibly that partially explains what happened. If I substitute the value before pasting the formula into the Formula Workshop, it gives the result. With the local variable in the formula, it never gives a result.

With the local variable in the formula, it never gives a result

I would have expected it to simply produce an error.