PanX and I do not get along. I’m sure it’s my fault, but still …

A procedure which works flawlessly in Pan 6 gives the wrong result in PanX. After much investigation, I found the failure point in the code following a SELECT command. Here it is:

Field Actual Distribution is numeric floating in each Pan version, and formatted identically. I am running OS 10.13.6, with PanX 10.2.0.b32.

Does anyone know what might be the problem? The Pan6 code was “copied” and “pasted” into PanX. There were some syntax corrections necessary in other areas of code, but not is this section of code.

You said this is extracted, so it may be covered earlier in the procedure, but this much doesn’t show that you’ve activated «Actual Distribution» as the target field of the FormulaFill.

You also didn’t indicate it Total is working. Or, for that matter, although it’s implied in your post is the message coming up to indicate the a selection was empty?

One other thought, have you tried just applying the formula manually to see what result you get?

results in a message displaying the letter A.

is the current field whatever it is.

So I would suggest some changes to your code:

Thank you for your suggestions.

Further research on my part shows the culprit is the SELECT command. Try this out on a database of your own which has a numeric floating field with positive and negative values:

PanX will not execute the FormulaFill command.

My example has a typo (your field instead of yourfield).

But the result is the same.

In both Panorama 6, and Panorama X, if a selection fails, then statements that make massive changes to the database are suppressed. In Panorama 6, a statement that contained info("Empty") would cancel that feature, because it would then be assumed that the procedure knows that the selection failed, and it is doing it with eyes wide open. That doesn’t seem to be true in Panorama X, but I haven’t found any documentation that it is deliberate.

After the successful SelectAll, the FormulaFill won’t be suppressed.

I knew I could count on you. This feature should be documented.

This post illustrates that when you post an excerpt of code, you need to be very careful in choosing the excerpt.

I think the excerpt you have chosen makes no sense on it’s own. Why on earth do you want to remove negative numbers only when the selection is empty? It seems like the one should not be connected to the other. I would suggest that your code should probably be:

Also note that there is a simpler way to change negative numbers to zero.

This feature should be documented. 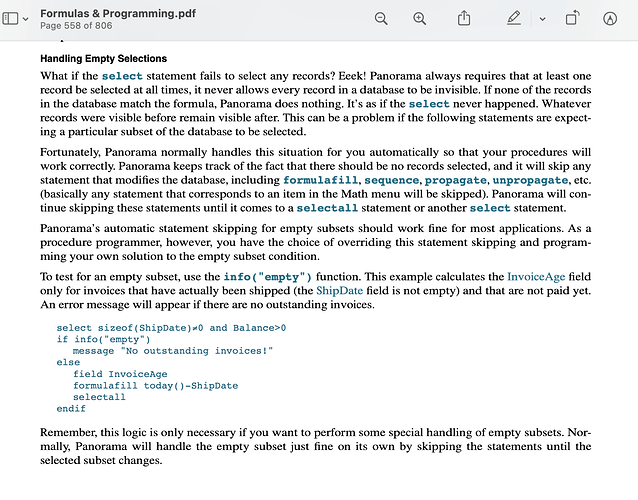 In Panorama 6, a statement that contained info("Empty") would cancel that feature

Did you actually try this? That’s not what the documentation says. I think that Panorama 6 and X work exactly the same in this regard – only another select or selectall cancels the empty selection.

My guess is that Vic’s code never worked correctly in Panorama 6, it just wasn’t ever noticed. Just because code is old doesn’t mean it is correct. If I were @vicelly I would carefully review this entire procedure, perhaps rewrite it from scratch.

Did you actually try this? That’s not what the documentation says.

I hadn’t tried it. I simply remembered it from a discussion on the QNA. I just now tried this, and the FormulaFill was not suppressed.

If I remove the if and endif statements, the FormulaFill is suppressed.

I simply remembered it from a discussion on the QNA.

My guess is that Vic’s code never worked correctly in Panorama 6, it just wasn’t ever noticed.

Sorry, Jim. That is absolutely incorrect!

There is an important reason that I need to change negative numbers to zero, but keep positive values unaltered when the select is empty.

The entire procedure summarizes distributions “from” an IRA account, and repeats that record for the “to” account. So initially there are two records in the database for each distribution. A separate check makes sure the amounts in the “From” account (positive) match the amounts in the “To” account (negative). A Total command showing zero in the summary record ensures that. That was the reason for the SELECT command of summary records different from zero.

It isn’t helpful to say the excerpt makes no sense. The snippet of code I included “makes sense”. It just isn’t obvious without knowing what the entire procedure is doing.

PanX and Pan6 DO NOT work the same way in this instance. Try it and see.

It just isn’t obvious without knowing what the entire procedure is doing.

That’s what I meant by “doesn’t make sense”

There is an important reason that I need to change negative numbers to zero, but keep positive values unaltered when the select is empty.

Since I don’t know what your selection is, no one on the forum has any way of understanding that reason.

In any case, if that is really the case then I would think it would be much clearer programming practice to code it like this:

I think this code makes it much clearer exactly what is going on, and it makes it very explicit what records are being changed by the formulafill.

Sorry, Jim. That is absolutely incorrect!

PanX and Pan6 DO NOT work the same way in this instance.

It does appear that this paragraph didn’t make it into the Panorama X documentation.

I’ve added a new help page to cover this topic, and I even did some rewriting and added more examples:

This new page is now explicitly mentioned and linked to on the select and selectwithin help pages.