Have you run b18, or b19 before? This sounds like a problem that appeared before.

The new b18 release has a new database integrity feature (described in the release notes – everyone should read them!) Each time a database is opened, Panorama checks it to see if it is damaged. If it is, you’ll see an error message and Panorama won’t open the database. You mention “the dropbox copy”, which makes me think you are storing the database in your Dropbox folder. That may be the source of the damage. This could especially happen if a database has been modified on another computer and…

If the database was saved before by b18, or b19 an integrity seal was added to it to check for corruption or tampering. If you subsequently opened and modified it with an earlier version of Panorama, the integrity seal wouldn’t have been updated to match the change.

You can turn that feature off in your preferences in b18 or later, and it will open the file. 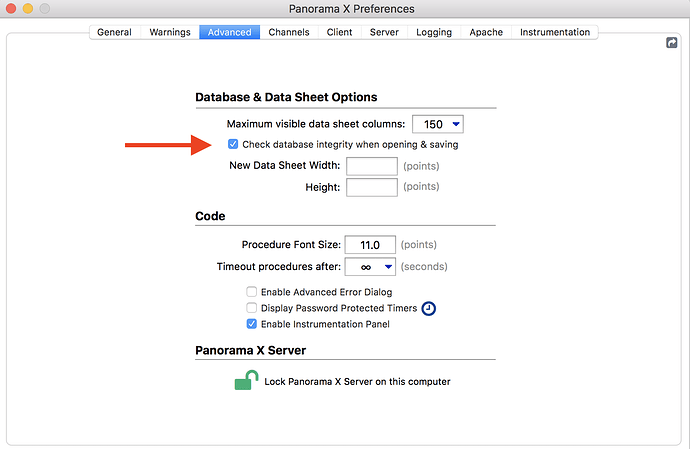 Unchecking the “Check database integrity…” button allowed the DB to open. Actually it is 2 DB with 6 supporting files. Unfortunately, the customer purchase form doesn’t work. It did (does) in b16. I thought there was something wrong with the form that might have caused the initial opening problem, so I rebuilt the form from scratch. It work with one test input and then failed from then on. Going back to b16 and hoping the version will be OK.

Going back to b16 and hoping the version will be OK.

I would recommend you jump ahead to b20.

b20 seems to have solved the problem.