Don't want file to automatically save

I am in the midst of trying to learn Pan X.
I have been a Panorama Classic user for 30 years and am very good at it.
But Pan x scares me to death.

For this discussion group, my questions may sound stupid, but here goes.
I am playing around with several different ideas of doing a database and forms for it.
My big problem, it seems that every time I do some work, it saves it automatically. I hate this because a lot of time I am playing around with several ideas, but then if I am working on something and don’t like it, I can’t seem to go back to the original database. How can I get around with automatically having it save all my work. I want to be able to save the file when I deem it ready to me saved, not before that.

In System Preferences, click the General tab, and then check “Ask to keep changes when closing documents.”

When you close the file or quit the application, if the file has changed since your last manual save, you will get this dialog.

Note that Dave’s suggestion will affect ALL of your applications that use Apple’s standard document handling code, not just Panorama. So it will also affect Pages, Numbers, Keynote, etc. This is because Panorama X fully conforms to Apple’s standard behavior.

Dave, thanks now is the system preferences for Panorama???
Reason, my Panorama doesn’t have that in General tab. It looks like this: 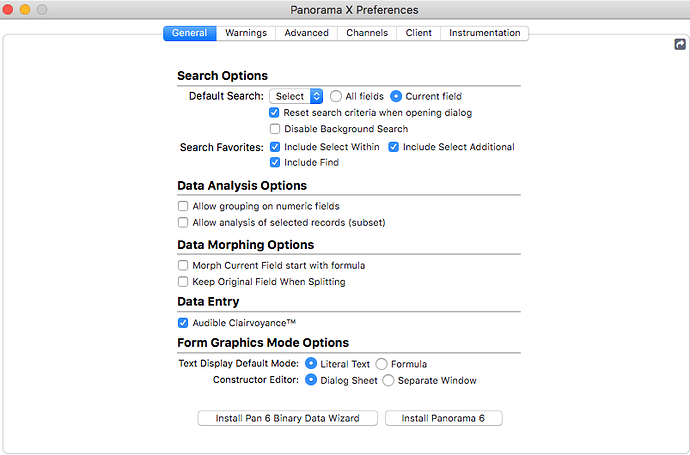 Another thing, I am still using High Sierra, does taht matter???

Ok, you want me to do it on the general system. Have found it. Question, what does this mean?

When selected, open documents and window will not be restored with you re-open an app.

Another thing, see that Jim voiced in with all it will affect other programs. I use mostly BBedit and sometimes Microsoft Word. Are those effected with this or is it only Pages, Numbers and Keynotes which I never use.

I can’t speak specifically for Bare Bones, Microsoft, or anyone other developer. But what I can say is that a developer would have to go to considerable extra effort to opt out of this behavior, so nearly all document based applications will follow the settings in the System preference panel.

Ok, thanks for the info.
Guess that is progress, because of what Apple has done the last four years have seen great programs get trashed and in my humble opinion I find the Mac post High Sierra systems a mind field of stuff I don’t need replacing stuff that I have used for decades. Just hope that my trusty MacBook Pro can last another 15 years or so and take me to old age.

Just hope that my trusty MacBook Pro can last another 15 years or so and take me to old age.

I think that is very unlikely, unless you are willing to give up all use of the internet. Because of security issues, I think it is going to be less and less possible to continue using old systems unless completely standalone not connected to any network. Think of it this way – can you imagine using a computer from 2006 on today’s internet? That’s not going to work very well, if at all.

In addition, you are increasingly going to be unable to run any new software on older systems. Apple is rapidly evolving their developer frameworks and most developers are unwilling to stick with the old frameworks when the new ones are much easier to work with. I forsee a huge influx of new Mac software over the next few years, but none of it will run on High Sierra. I think on the Mac you will increasingly see what has happened on iOS for several years now, that new software will require either the latest version of macOS or at most one back from the most recent.

I don’t forsee Panorama ever being that agressive, but right now Panorama X supports a span of 7 different versions of macOS. At some point we will be cutting off some of the older versions to allow Panorama to take advantage of newer Apple technology.

I was only kidding on my 15 years, realize I have between three to four years at best. Since I am 65, it’s hard to change gear now. But appreciate the predicament that Apple has put you all through, change is always hard.